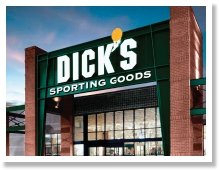 In order to expedite the construction process and ensure no moisture-related issues in the flooring application, Fulcrum determined SCP 327 should be used at time-of-placement because use of SCP 327 would ensure that the concrete floor would resist moisture migration and reduce spider-cracking, slab curl, concrete shrinkage, and expansion. SCP technology also saved costly flooring/surfacing preparation, leaving no topical residue.

Foot and trade traffic accessed the floor shortly after application. The slab received a superior cure, which made it possible to install the vinyl flooring within 14 days after the concrete placement. This not only allowed the retail store to open two weeks early, it ensured that the flooring would benefit from SCP 327’s concrete waterproofing and concerns about concrete shrinkage and expansion, curling and warping would be minimized.

Fulcrum achieved its tight construction schedule and Dick’s Sporting Goods was able to occupy the store space much faster than in a traditional construction time frame. Over a year later, thanks to Spraylock’s industry-leading concrete protection, the floor is in excellent condition — time-proven, having incurred none of the industry’s typical concrete waterproofing complications.

SCP Protects Over 1 Million Square Feet of One of the World’s Largest Pie...
Scroll to top Do NOT follow this link or you will be banned from the site!